As we commemorate Martin Luther King’s birthday this year, consider what you admire most about him.

I think first of Dr. King’s courage. To oppose injustice, he often journeys to jail. This requires more than acceptance of the legal penalty for civil disobedience. Southern jails are particularly dangerous for a black man leading public demonstrations.

I also remember Dr. King’s eloquence. When writing his Letter from Birmingham City Jail, he describes “the vast majority of your twenty million Negro brothers smothering in an airtight cage of poverty in the midst of an affluent society.” This is not merely a grievance; it is a petition for empathy. 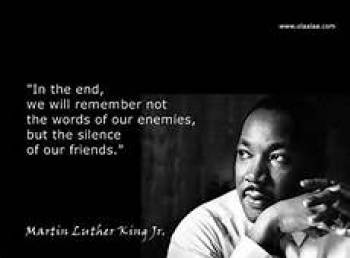 White clergymen write that Negroes must be patient: Instead of protests, Negroes must wait for changes in the law. Dr. King responds by citing previous postponements of demonstrations. He then appeals to his country’s conscience: “There comes a time when the cup of endurance runs over, and men are no longer willing to be plunged into an abyss of injustice where they experience the blackness of corroding despair.” This, he concludes, demonstrates the need for “our legitimate and unavoidable impatience.”

Some observers share this diagnosis. The genius of Dr. King is articulating the prescription:  Nonviolent direct action. He speaks of “constructive nonviolent tension” as the impetus to growth and the precursor to negotiations long overdue.

Dr. King is the master of metaphor. He explains that peaceful demonstrations do not create tension; they expose the national tensions already present.  “Like a boil that can never be cured as long as it is covered up but must be opened with all its pus-flowing ugliness to the natural medicines of air and light, injustice must likewise be exposed, with all of the tension its exposing creates, to the light of human conscience and the air of national opinion before it can be cured.”

I believe it is this philosophy of loving confrontation for which our nation is most indebted to Dr. King. How many advocate love for their enemies as he did? “We shall love the segregationist,” he declared. “Throw us in jail, and we shall still love you. Send your hooded perpetrators of violence into our community at the midnight hour and beat us and leave us half dead and we shall still love you.” He envisions victory not as violence securing vengeance. Rather victory includes redeeming the enemy through undeserved suffering.

This magnanimity of spirit is practiced as well as preached. The day Dr. King’s house is bombed, he rushes home. When he sees his wife and baby are safe, he turns his attention to the crowd outside.  Blacks with guns, knives and bottles want revenge. The police cannot break them up. The mayor, police chief and reporters witness the community’s rage.

In the midst of this mayhem, Dr. King speaks from what remains of his front porch: “Now let’s not become panicky. If you have weapons, take them home.  We cannot solve this problem through violence. Remember the words of Jesus: ‘He who lives by the sword will perish by the sword.’ We must love our white brothers, no matter what they do to us.”

There are shouts of “Amen” and “God bless you, Reverend,” from the crowd. According to one reporter, “Many people were crying. Silently they went home. A bloody race riot was avoided.”

I value Dr. King’s courage, eloquence and nonviolent philosophy. But what I admire most about Dr. King is—despite the perpetual violence perpetrated by his enemies—he persisted in loving them.

Does Racial Inequality Persist?
Seeking Racial Justice is both Personal and Political
The Legacy of Slavery in Rhode Island
Transforming Our Racist Culture
Faith and Love Can Heal Our Divisions

“The secret of life is to “die before you die”–and find that there is no death.” — Eckhart Tolle