“The use of this barbarous weapon
at Hiroshima and Nagasaki
was of no material assistance
in our war against Japan.”
Admiral William Leahy

Leahy was not alone. Six of seven World War II officers receiving their fifth star opposed the atomic bombings. General Douglas MacArthur stated the bomb “was completely unnecessary from a military point of view.” Air Force General Curtis LeMay concluded “the atomic bomb had nothing to do with the end of the war.” General Dwight Eisenhower agreed: “It wasn’t necessary to hit them with that awful thing.”

Moreover, 83 percent of the scientists working on the Manhattan Project wanted to demonstrate the bomb’s power to Japan.

Seventy years hence, we must ask why two cities suffered nuclear annihilation despite opposition by U.S. scientists and our military’s elite. 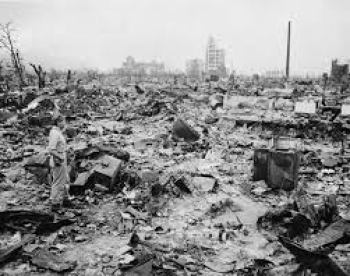 The head of the Manhattan Project, Major General Leslie Groves, shocked Physicist Joseph Rotblat by stating the reason in March, 1944: “The main purpose of this project is to subdue the Russians.”

Groves was right. On July 17, 1945, President Harry Truman wrote in his diary regarding Stalin, “He’ll be in the Jap war on August 15. Fini Japs when that comes about.” Indeed, upon hearing of a successful bomb test, Truman responded with excited utterance that the bomb will “keep the Russians straight.”

Thus, the purpose of Truman’s atomic bombings of Japan was to visibly demonstrate our Cold War dominance.

The U.S. had firebombed more than 100 of Japan’s ‘paper cities.’ As Kuznick notes, most Japanese officials “saw little difference between the United States wiping out entire cities with three hundred planes and thousands of bombs or doing so with one plane and one bomb.”

These ‘conventional’ bombings prompted reflection. Regarding these urban infernos which incinerated countless civilians, Secretary of War Henry Stimson said he “did not want to have the U.S. get the reputation for outdoing Hitler in atrocities.”

Truman Deceived the U.S. Public and Himself

Truman’s assessment of a July 18 intercepted cable from Japan was, “Unconditional surrender is the only obstacle to peace.” Still, Truman rejected Japan’s only term for surrender: The Emperor remaining as figurehead. He later accepted this condition—after these cataclysmic bombings.

Then Truman falsely proclaimed: “The dropping of the bombs stopped the war, saved millions of lives.” He convinced 85 percent of Americans—and overwhelming evidence to the contrary was kept secret.

Truman wrote, “We have discovered the most terrible bomb in the history of the world.” Nevertheless, he wanted it used “so that military objectives and soldiers and sailors are the targets and not women and children.” This apocalyptic denial was delusional.

The Hell of Hiroshima 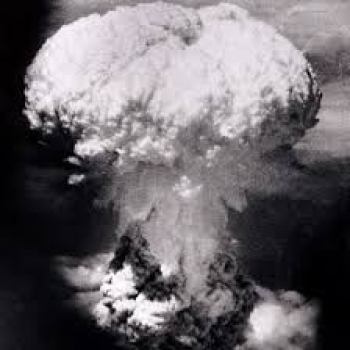 The hell of Hiroshima

Pilot Paul Tibbets described the destruction: “The giant purple mushroom…was still boiling upward like something terribly alive. Even more fearsome was the sight on the ground below. Fires were springing up everywhere amid a turbulent mass of smoke that had the appearance of bubbling hot tar.”

Co-pilot Robert Lewis’ flight log expressed his astonishment: “My God! What have we done?”

The heinous consequences of these bombings: About 150,000 immediate civilian deaths; another 150,000 subsequent deaths from radiation burns and sickness; and myriads of hibakusha, the grieving men, women and children decimated with physical mutilation, genetic devastation and unimaginable suffering.

We rightly decry Hitler’s inhumane ovens. But is this not precisely what the atomic bombings accomplished: Creation of an inferno—so vast in its scope, so horrific in its tyranny—that the abhorrent imaginations which created Auschwitz would have rejoiced in the profundity of this evil? 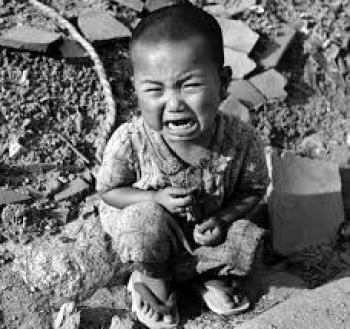 When considering issues of war and peace, we must all engage in necessary reflections on our capacity for inflicting unnecessary hell.

[Freedom begins when realizing] “you are not “the thinker.” The moment you start watching the thinker, a higher level of consciousness becomes activated. [You begin realizing] a vast realm of intelligence beyond thought.” — Eckhart Tolle