Editor’s Note: This 2007 article demonstrates the evidence for global warming was overwhelming even then. The moral challenge is even greater today if we are to avoid climate changes such as increasing drought, rising sea levels, and extremes in temperatures which will lead to massive increases in refugees, the famished, more intense storms and even wars over diminishing resources.

Many significant issues affect our globe: hunger, poverty, war and disease are certainly grave crises. Yet there is one challenge we rarely consider. When we do name it, we may think it requires little time or effort. Some doubt it has any significance.

An expert who researched this issue for more than thirty years states, “Today, we are hearing and seeing dire warnings of the worst potential catastrophe in the history of human civilization.” The issue is global warming and the expert is Al Gore.

If you have any doubts about the movie, An Inconvenient Truth, Roger Ebert has an unusual recommendation: “In 39 years, I have never written these words in a movie review, but here they are: You owe it to yourself to see this film.”

The recently released DVD is astonishing. Gore provides data, including a 2006 update, which overwhelmingly demonstrates the current consequences of global warming. Moreover, conducting business as usual will lead to far greater devastation. As Gore writes in his book, An Inconvenient Truth, “At stake is the survival of our civilization and the habitability of the Earth.” 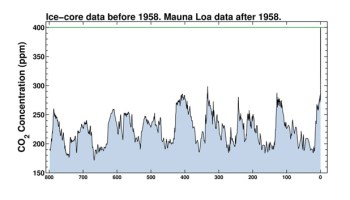 The increase of CO2 levels over 800,000 years. Scripps Institution of Oceanography

Is this significant? Consider that at the depth of the ice age, Chicago is buried in a mile of ice. During the height of pre-industrial global temperatures, Chicago’s weather is wonderful. Imagine tripling the distance of this gap in the direction of unbearable heat. This is what we bequeath the generation born today if we continue our present rate of spewing greenhouse gases.

There is no doubt about the impact of our pollution on the environment. In the last 150 years, 20 of the hottest 21 years have occurred since 1980. This half a degree climb in global temperature has increased the severity of hurricanes, tornadoes, wildfires, droughts, soil evaporation, glacial melting and flooding.

Consider a few examples: Across the western U.S., 200 cities and towns had record temperatures in 2005. One massive heat wave in 2003 killed 35,000 Europeans. Lake Chad, the world’s sixth largest lake, has shriveled by 95% in 40 years, contributing to the famine in Darfur. Compared to less than 100 floods in the 1950s, more than 600 were recorded in the 1990s. Mass extinctions have increased 1000%. The transformation of our ecosystem has resulted in 30 new diseases in 30 years, including West Nile Virus.

Unfortunately, global warming is also accelerating. As ice from the Arctic, Greenland and Antarctica melt, the lost ice can no longer radiate 90% of the sun’s heat back into space. Instead, the water replacing this ice absorbs 90% of the sun’s heat. Thus, the greatest rise in temperatures is at the two poles. As a result, ice shelves are melting, cracking and breaking.

We dare not reach a tipping point that unleashes sudden disastrous consequences. If either the West Arctic Ice Shelf or Greenland melt or break off, the sea level will rise by 18 to 20 feet. Katrina’s devastation would be mild by comparison. In addition to catastrophic planetary effects, more than 100 million coastal survivors would become refugees.

Gore is nominated for an Oscar for the movie and a Nobel Peace Prize for his movement to reduce global warming. Both are deserved. For many years, he has assembled and publicized the diagnosis of Earth’s disease. As we will explore in this series on global warming, Gore also prescribes effective treatment for our planet.

“This is a moral, ethical and spiritual challenge,” Gore writes. Let’s suffer the inconvenience of facing the truth. Corrective action is far better than the alternative.

“If we could read the secret history of our enemies, we should find in each man’s life sorrow and suffering enough to disarm all hostility.” — Henry Wadsworth Longfellow